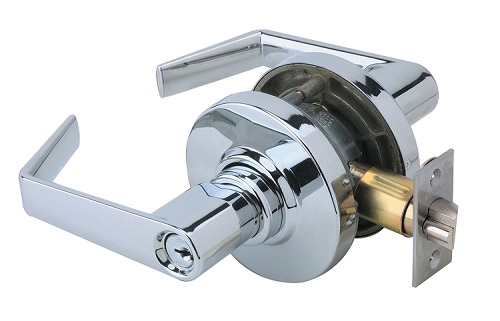 What Is A Storeroom Lock?

Storeroom locks are named for their typical application on storage room doors. In this blog post we will provide a brief overview of the storeroom lock function and variations to that function among the different types of locking hardware that can be installed on commercial doors.

According to BHMA/ANSI standards, the standard storeroom function for cylindrical bored locksets is designated F86. The basic operation is described as follows:

“Dead locking latch bolt operated by key in outside lever, or by operating inside lever. Outside lever is always inoperable.” 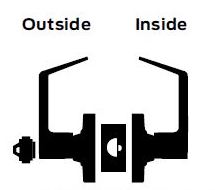 This operation requires a key at all times to gain access to the room or space. Because the outside lever is always inoperable or, in other words, is always locked it means the room will always remain secure once the door is properly closed and latched. Cylindrical locks with this function have a latch bolt that is dead locking meaning the latch has a small deadlatch that keeps the latchbolt fixed when the door is closed and latched. This means the latch bolt can’t be retracted with a knife or a credit card when the door is closed and secure (like you see them do in the movies).

Mortise locks have a larger lock body and more room internally for moving parts than cylindrical locks. This allows for variations to the storeroom lock function beyond the description above.

BHMA/ANSI designates a mortise lock storeroom function as F07. The function description is as follows:

“Latch bolt operated by key from outside or by operating inside lever. Outside lever is always inoperative. Auxiliary dead latch.” 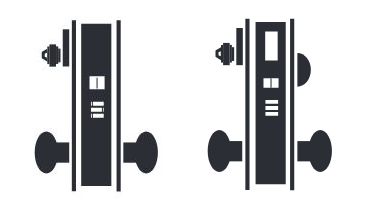 This description is almost identical to that of the cylindrical lock. However, many manufacturers also offer a storeroom function mortise lock with an added deadbolt function. This added security is often requested when extra durability is wanted. When egress is necessary the inside lever retracts the latchbolt and the deadbolt. A thumbturn on the inside of the lock will operate the deadbolt and a key on the outside of the lock will lock/unlock the deadbolt as well. The outside lever will remain inoperable at all times.

The outside trim function is designated 03 by BHMA/ANSI and is described as the following:

“Entrance by trim when latch is released by key. Key removable only when locked.” 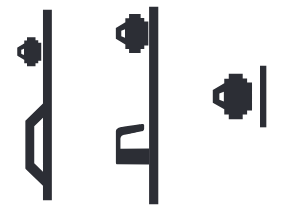 Outside trim on an exit device can take several different appearances and still have the same function. For example, manufacturers offer trim that looks like a pull handle, some that look like an operable lever but is always fixed, or a just cylinder with an optional pull that can be simple or decorative. Any way the trim is supplied, if the nightlatch function is specified, it will operate in this same manner.

With the rise in popularity of electronic access control, the need for security as well as convenience has to be brought into balance. Electrifying locks allows for credential readers to be tied into an access control system throughout a building. The storeroom function is the go to mechanical operation that has an electrified lever or latchbolt that is controlled by the access control system. There are two basic options when looking at electrified storeroom functions: Electrically Locked (EL) or Electrically Unlocked (EU). 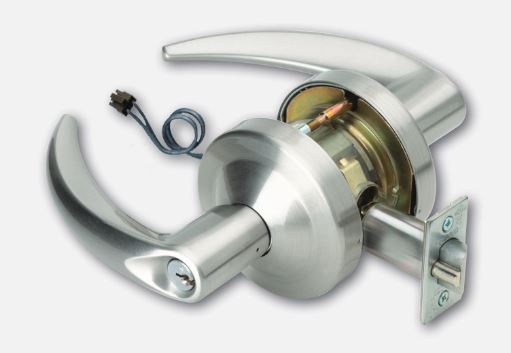 Electrically locked (EL) locksets require power to remain locked. When a credential is presented to the access control reader, power is shut off momentarily which unlocks the lever. Manual key override is also allowed which retracts the latch allowing the door to be pulled open. Finally, if power goes out in the building then the door will remain unlocked. This type of electric locking is often called Fail Safe (FSA) because it remains open and safe for passage through the opening.

Electrically unlocked (EU) locksets require power to unlock. When a credential is presented to the reader, power is supplied to the lever which momentarily unlocks the lever. Manual key override is allowed as well. If the power goes out in the building then the door will remain locked. This type of electric locking is referred to as Fail Secure (FSE) because the door remains secure which protects the room from unauthorized access. 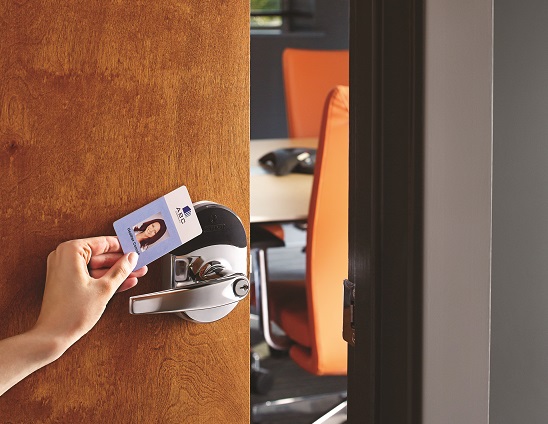 The type of electric locking (EL or EU) that is needed will be determined by how the room or space is utilized. Either function always has an operable inside lever that allows for immediate egress at all times.

Storeroom locks allow for a range of applications and provide higher security because you need not worry about forgetting to lock the door with your key as you leave. It will always remain locked! If you need a storeroom lock, or have additional questions, please contact us at Beacon Commercial Door & Lock and a sales representative can assist you with all your security needs.