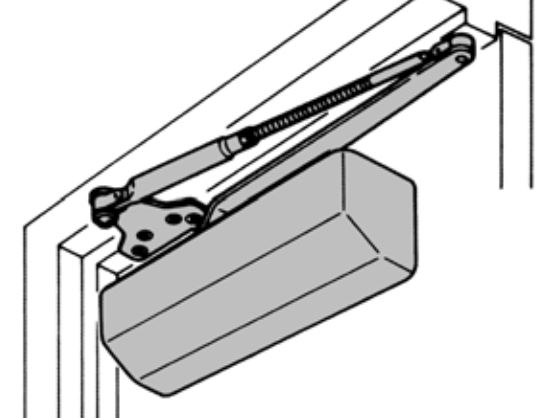 What is a Commercial Door Closer Parallel Arm Bracket?

Commercial door closer manufacturers provide many different styles of door closer arms. Each type of closer arm provides a certain type of control including holding a door open or stopping the door from going beyond a certain degree of opening (read this previous blog post to learn more about closer arms). There are two basic arm types that are used most often. They are the parallel arm and the regular arm. We talked about the differences between the two arms in this popular blog post.

Many door closer manufacturers offer closer arms that are considered a regular arm or parallel arm. But if you’re not sure which arm is correct at the time of ordering, how can you save time and prevent having to reorder the closer? Or without having to order a new closer arm?

Door closer manufacturers are aware of the issues installers face on the job site. It may not be until installation of the door closer that the closer arm style is decided (parallel mounting or regular arm mounting). If the closer arm is going to be a standard arm without an integral stop then you’re in luck. Most manufacturers supply a regular arm with an additional piece of hardware that converts it to a parallel arm.

This hardware can all come in the same box allowing the installer to get the job done the first time without having to reorder an arm or new closer.