What Are Overhead Door Stops?

Overhead door stops are installed at the top of the door and an arm is attached to the frame. Overhead stops can be surface mounted to the face of the door or they can be concealed in the head of the door. The arm slides along a track or rod and when it comes to the end of the track it will stop against a bumper or spring built in the track. When the door is used frequently and needs to be stopped reliably without damaging other hardware or the wall, an overhead stop is recommended. They are meant be used as a stop constantly or where other material behind the door, such as furniture, needs to be protected. 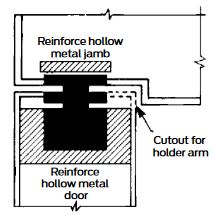 Overhead door stops have built-in materials that help reduce the wear and tear on the door as it stops the swing of the door. The door stop will limit the swing of the opening to between 85 and 110 degrees, generally.

If an overhead door stop is used in conjunction with a door closer, special templating and additional hardware may be required to allow both pieces of hardware to be installed on the door. Their mounting locations may conflict so special adapter plates may be needed. Friction overhead door holders should not be used with door closers since they will work against each other. A fixed hold open device, on the other hand, can be used with a door closer.

Overhead door stops will need to be sized according to the width of the opening and can be affected by the type of hinges used. If an overhead stop is too small, the door may not swing all the open before it is stopped. An overhead stop that is too big may not stop the door before striking the wall behind it.

Door closers with built-in door stops are okay for openings where the door stop is not used too frequently. When the door is constantly being stopped against the overhead mechanism, then an overhead stop will be a better solution than an integral closer arm stop. Overhead door stops will help prolong the life of the opening and effectively protect people from injury and protect surrounding objects from damage.

The Convenience of Interchangeable Cores

What Is The Rough Opening For Hollow Metal Frames?