The Essentials of Flush Bolts

Flush bolts are installed into the lock stile on the inactive leaf of a pair of doors. There are often two bolts, one installed at the top and one at the bottom of the door. The strike of the top bolt will be in the head of the frame and the strike for the bottom bolt will be in the floor. Other door hardware used on the opening must be compatible with the type of flush bolts you use. Building codes and life safety requirements may also restrict the type of flush bolts you can use.

Metal door flush bolts have longer rods which lowers the height of the lever used to retract the bolts. The standard length for these rods are 12″ but they can be extended to 18″ up to 24″ and sometimes even 48″. The height of the door can determine the length of rod that will be used.

Additionally, the constant latching top bolt has a beveled face, similar to a latch on a bored lockset. When it comes in contact with the lipped strike it will re-latch by itself. If a top bolt and a bottom bolt are used, the bottom bolt will be an automatic latching flush bolt. 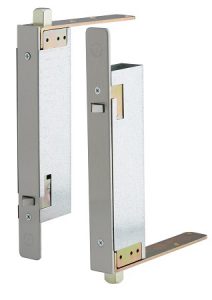