Exit Device Basics that You Should Know

Exit devices have been around since the early 1900’s after several disastrous events took the lives of hundreds of people trapped inside buildings. Exit devices are now required by code at certain openings based on a room’s occupancy type and load. Getting the right exit devices can be critical for life safety.

You may have heard an exit device called a “Crash Bar” or “Touch Pad” or “Push Bar” or “Panic Device”. Depending on who’s talking, they may be referring to the same thing or 5 completely different things. So lets get some of the basics down.

First of all, exit devices are categorized as Panic Hardware or Fire Exit Hardware. A device in either category is physically labeled as one or the other and must meet certain criteria to be labeled as panic or fire rated hardware.

There are 3 types of exit devices which can be visually distinguished from one another. 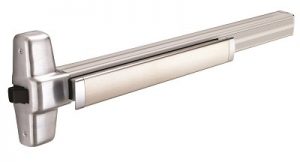 Touch bar devices are the most commonly used design. The touch bar is operated by pushing the pad into the body which retracts the latch. A cross bar device is recognizable by the bar that extends the width of the door from the latch case to the hinge case of the device. An integral device is recessed into the face of the door and it does not extend out of the door as much as the other devices.

Exit devices come in one of 4 types:

There are more types of devices besides these, but we will stick with these for our brief discussion here. 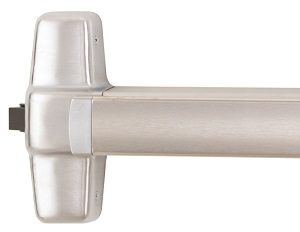 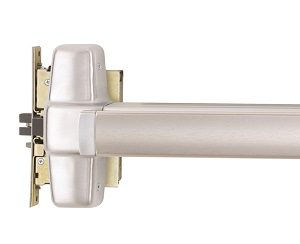 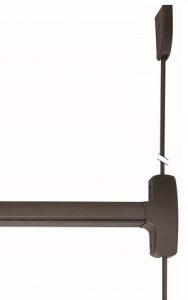 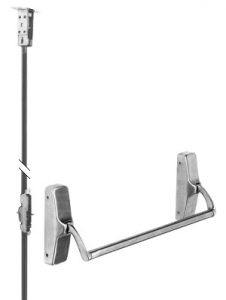 Rim devices have a latch that engages a strike that is surface mounted to the soffit of the frame. Rim devices are mostly used at single doors.

Mortise devices have a mortise lock body that sits inside a pocket prepped in the side of the door. A standard 4-7/8″ strike prep in the frame is used.

Vertical rod devices can have latches at both the top and bottom of the door or just one top latch. The bottom latch is often not desirable since the latch has the possibility of dragging on the floor and causing damage. The top latch engages a strike on the soffit of the frame’s head piece. Vertical rods are used at double doors when both doors are opened independently of each other.

Exit devices have a lot of functionality available for many different applications. Check the function you want against the applicable codes to ensure you have an approved setup. Options for exit devices include:

That’s just to name a few. Exit devices can be paired with many different trim options and other hardware to create an opening system that meets your needs.

Don’t hesitate to contact Beacon CDL to schedule a consultation or to troubleshoot an existing opening. We’ll work together to get your exit devices and doors functioning properly.

What the Heck is Gasketing?

What to Look for in Hardware Finishes