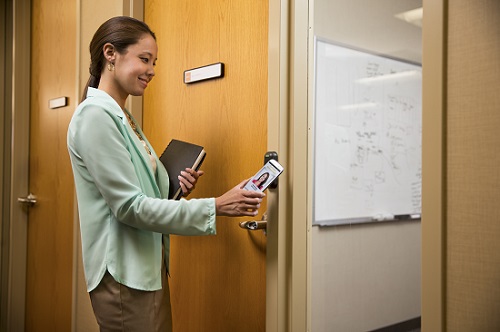 Electric strikes are installed in place of the typical strike supplied with a lock or exit device. Electric strikes can be used with hollow metal frames as well as wood and aluminum frames. 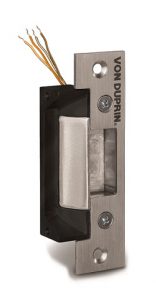 An access control system may be tied to the strike or the opening may be a stand alone system. A credential reader will be connected to control the strike. Electric strikes require a power supply to function. 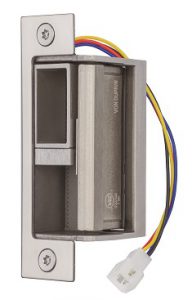 Most electric hardware will be either electrically locked (fail safe) or electrically unlocked (fail secure). Depending on the application, you may use one more often than the other. Electric strikes are most often installed at the opening as a fail secure device. This means the gate of the electric strike remains secure until power is applied, at which time the strike will release the gate and access is granted. If an electric strike is specified at a fire rated opening it will have to be fail secure so that the latching mechanism remains secure in the event of a fire.

Fail safe electric strikes are not preferred because they require constant power to the device to remain locked. Once power is removed, the strike is unsecured meaning that even if the locking mechanism on the door is locked, someone can still gain access to the room. Constant power can also cause the electric strike to heat up significantly. Fail safe is recommended for life safety applications.

When access control is wanted at an opening, electric strikes can be one of the easier ways to accomplish it.

An electric strike will require a prep at the strike of the frame. This can be a simple prep that only requires a small of amount of work.

Other methods to provide access control may include the use of an electric lock which requires a prep to the hinge jamb of the frame as well as a prep through the door. These preps can be more complicated and costly to do and often the essential function of the opening is the same.

How To Unlock The Mystery of Cylinders