So far you’ve learned about the first 2 door hardware basics that must be covered for a door to function properly: to hang the door and to secure the door. The next step in meeting the 4 basic needs of a door is to control the door.

Controlling the door mostly deals with what happens to the door after it has been opened. Hardware used for control can also effect the door before it is opened. Door hardware that is used for controlling a door includes: 1) Closers, 2) Door Stops and Holders, and 3) Door Coordinators.

It is no secret what a door closer is meant to do. A closer will close the door after an individual has opened the door and passed through the opening. To explain how a door closer works as simply as possible: as the door is opened, a spring inside the closer body is loaded with tension from the closer arm and once the door is no longer in the control of the individual passing through the opening, that spring decompresses and the arm closes the door.

A closer is important to the security of a space, ensuring that the door always closes and remains latched. Closers also help keep areas environmentally controlled by keeping the point of separation sealed, thereby lowering the transfer of heat and energy throughout a building or space as needed. Finally, closers are essential for fire rated openings to prevent the spread of smoke and fire through the opening. 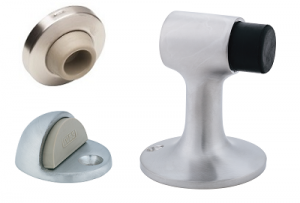 Door stops and door holders can be installed in several ways. They can be mounted on the floor, attached to the wall, or mounted overhead to the door and frame. The conditions surrounding the opening will often determine the type of door stop or holder that should be used.

If cabinetry or furniture is behind the door then an overhead stop may be more appropriate than a wall stop. Floor stops can be a tripping hazard in some locations so a wall stop may be a better application.

Coordinators are only used at openings with double doors. Often at a pair of swinging doors only one of the door leafs will be used frequently. The secondary door leaf, referred to as the “inactive” door, will remain shut for most of the time and, if opened, needs to close before the primary door leaf, or “active” door, closes. A coordinator facilitates this requirement and ensures that the doors are not damaged or left unsecured after being opened.

By using these pieces of hardware on a door you will be able to control the function and security of each space in a building.

In the next article we will conclude this 4 part series of hardware basics by discussing hardware that is used to protect the door.