A motor or solenoid is built into the body of the exit device and hardwired through the door. When a signal is sent to the device, either from a credential reader or from some other electric signal switch, the latchbolt is retracted momentarily allowing the door to be pulled open. Electric latch retraction is often used for openings that have auto operators. When a person activates the auto operator, the operator sends a signal to the exit device and then the operator opens the door. 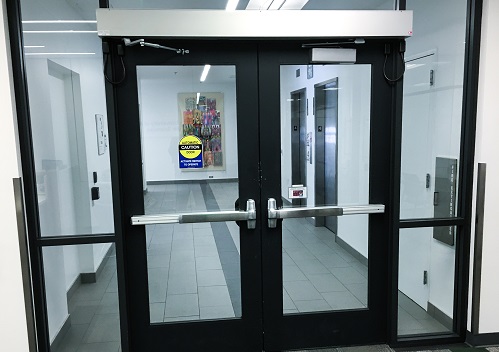 The latch can also be held retracted for a longer period. This can be set up with the access control system so that the device is on a schedule. At the beginning of the day the latch can be retracted and held open for business hours and then released and secure for closing time at the end of the day. When power is removed, the motor or solenoid releases the latchbolt to secure the opening.

Exit devices that are installed with the delayed egress function are used for controlled areas where immediate exit needs to be delayed. Delayed egress will not prevent exit but it will delay it for a short time allowing security personnel to verify if the person attempting to exit should be using that exit or not. When someone pushes against the touch bar a timer will begin to countdown from 15 seconds or more (as approved by the authority having jurisdiction). After the time has expired the device will allow passage through the opening.

A delayed egress device may be connected to a horn or some other external alarm that alerts access control that an attempt to exit is occurring.

Exit devices with the delayed egress option are popular for use in retail environments where egress is required in an emergency event but where shoplifting is also a concern. Mental health facilities are another common application for these devices to help prevent occupants from coming to harm. These devices must be used in accordance with the Life Safety Code NFPA 101.

Exit devices with an exit alarm have a much simpler operation than a delayed egress device. An exit alarm can be either battery powered or hardwired through the door via an electric power transfer (EPT). Once the push pad is depressed, an audible horn will sound and the person will have immediate egress. Exit alarms are used to deter usage of the opening but are installed in less controlled applications.

Credential readers can be tied to an exit device that has electric trim. Exit device trim that is electrified will be fail safe or fail secure. It will be powered through an EPT and can be tied into the access control system. 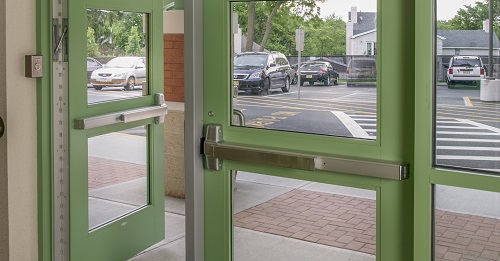 How Are Door Hardware Standards Helpful?

Door Hardware You Should Be Thankful For